Vigilante-saving the world-one murder at a time! 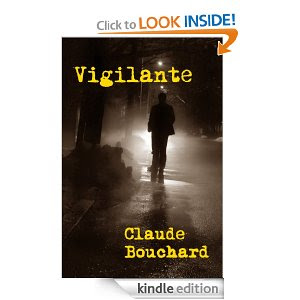 Vigilante was my first step into the inspired world of Claude Bouchard.  This spellbinding story kept me guessing until the very end.

A serial killer is busy with a variety of “projects”.  You see, this serial killer is on a mission.  He wants to rid Montreal of the vermin that keeps good people up at night.  He exterminates a variety of criminals.  They are the lowlifes that we love to hate; pimps, rapists, drug dealers- you get the idea.

Here is where conflict steps in.  While most people feel that the Vigilante is doing good work, there is always that annoying legal issue.  The police must find the killer.  Moreover, to make it even more complicated, the killer is a likable guy!

Law enforcement teams up with cutting edge technology and discover more than they bargained for.  The storyline is brilliant.  The characters are complex and you will immediately form strong feelings about each of them.  However, will you be able to figure out the identity of the vigilante?

I do not think so.

K- Claude, you’ve got yourself a new fan.  I really enjoyed the book. I just can’t believe that it was your first novel.  It’s excellent and the ending was brilliant!  You are quite knowledgeable in law enforcement, as well as technology. Is this part of your background?

C- Well, Kathleen, I’m always pleased to get a new fan, especially when it’s one as charming as you. Also, allow me to start by thanking you for the wonderful review as well as the invitation to do this interview.

To answer your question, no, I’ve never worked in law enforcement or information technology. I’ve always read a lot and my favourite genre is mystery/crime fiction so that, combined with imagination and common sense, is where my cop minding stems from. Though computers have interested me for the longest time, my background is in human resources and finance and I’ve yet to become an IT master by any means. I should point out that I wrote Vigilante in 1995, before emails and the Internet were the norm, so when I pulled out my manuscript in 2009, I was rather pleased with how what I’d written fourteen years earlier still made sense and reflected what is commonplace now.

K- You are quite welcome, Claude.  It is my pleasure.

It sounds like you were pretty Internet savvy back in 1995. I was selling computer training and most of our clients were trying to figure out what this “Internet thing” did!

Was there any special inspiration for this story?

C- The verdict of the O.J. Simpson trial is what flicked a switch in my mind, in the sense of criminals literally getting away with murder or other heinous crimes. The gears started churning as I imagined someone out there who would undertake ensuring that violent criminals pay for their actions. Vigilante was the result.

K- I’ll be honest- I could understand the Vigilante and his motivation.  He was just trying to make the world a better place.

You have a wonderful style of writing.  Is this something that comes naturally to you- or do you have to work at it?

C- With practice comes improvement and I’ve written tons of stuff over the years, much of it work-related though it remains writing nonetheless. As mentioned earlier, I’ve also done a lot of reading and still do which also contributes to honing one’s writing skills in terms of vocabulary, sentence and paragraph structure and so on.

Like any other writer, what is initially produced is a first draft which is then revised, edited corrected, reviewed, corrected some more… You know the drill. However, what I write in that initial draft reflects my writing style. The editing phase is more of a polishing activity versus a rewriting one.

K- What is your writing experience like?  I mean where do you sit?  What time do you write?  How often? For how long at each setting?

C- The best way to describe my writing experience or activity would be fluid, informal and unstructured. We have a three bedroom home with only one bedroom required so one room is an art studio and the other is a study which is where my PC is and where I spend most of my day.

Depending on inspiration and such, I do sometimes write in the morning but generally do so more in the afternoon, never evenings and rarely weekends. Speaking specifically of books (as I do maintain a blog, etc), I write daily at times when I’m on a roll and other times, not at all when I’m in a mulling phase.

Even when I’m actively working on a project, my writing is interspersed with research as well as Twitter and Facebook postings as I chat with people, promote my work and that of others. A day of writing can generate as little as a hundred words, as much as a few thousand and anywhere in between. I never set deadlines and a book is finished once it’s finished.

K- You sound like a true artist.  You just can’t schedule a burst of inspiration : )

If this were made into a movie, who would you cast in the roles?

C- Ah, you bless me with an easy question as I was recently asked this in another interview. I will now cheat and copy/paste what I replied then.

The question was asked to me about Chris Barry several years ago and the almost immediate answer was Matthew McConaughey at the time. Since then, I’ve always had difficulty picturing someone else though Thomas Jane and Paul Walker are plausible candidates.

Denzel Washington would be great in McCall’s role though age becomes a factor so possibly Isaiah Washington or Terrence Howard instead. Christian Bale would also be a consideration.

If you would like, I have a fun ritual that involves me giving you a scene and then you re-write it in your own delightful style. Would you like to try it?

We followed Jill through the doorway in to the studio.  Mirrors covered all surfaces of the studio.  There were no windows and the cool air was thick with the familiar aroma of incense.  “Oh my!” Tara stumbled a bit, disoriented. Ivan caught her arm. He was standing just inside the doorway.

All the mirrors gave the illusion of a creepy fun house.  On the far end of the room was a shelf that covered the entire wall.  The shelf displayed about a half dozen dolls.  As I got a closer look, I felt an odd tightening in my chest.  There was something strange about these dolls.  They were about 2 feet tall, impeccably dressed, and frighteningly life-like.  I gasped when I stepped closer to the red haired doll.  As I looked in to her eyes, I felt as though I was looking at a miniature woman.  It was eerie.
What is up with these dolls? Calm down, calm down….

Tara walked slowly, looking closely at each doll.  She appeared to be in shock.  She was particularly fascinated with one that had black hair and wore an African costume, complete with fancy headdress.  She leaned in and reached towards the doll, to touch it.  When her hand made contact with the dolls face, she snapped it back as though she had been burned.  She spun around quickly and looked at me.  I could see the fear in her eyes.

We need to get the hell out of here.

Jill gave us the faintest of smiles then unlocked the door, pushed it open and led us into the studio beyond. Tara and I stopped short as we gazed in awe at the room we’d just entered. All surfaces were covered in mirrors, the walls, the ceiling, even the floor we stood on.
“Oh, my,” Tara exclaimed as she wavered, disoriented by the multitude of reflections thrown at her from every direction.
Ivan, who stood just inside the doorway, caught her arm to steady her.
The mirrors were reminiscent of creepy fun houses found in old amusement parks. I noted a shelf which spanned the width of the far wall on which half a dozen dolls were displayed. As I approached to examine them more closely, I felt an odd tightening sensation in my chest. Though I was unable to put my finger on it, something was strange about these dolls. About two feet tall and impeccably dressed, each was frighteningly lifelike. I stepped closer to examine a particular red haired doll and gasped. As I looked into her eyes, I felt her gaze piercing into mine as though she was actually a miniature woman… Eerie…
‘What is up with these dolls?’ I thought with a rush of anxiety. ‘Calm down, calm down…’
Tara had followed me and now moved slowly before the shelf, pausing to look closely at each doll. Her movements were trancelike and she appeared to be in shock. She stopped before a black haired doll clad in an African costume complete with an elaborate headdress, seemingly fascinated. Leaning in yet closer, she raised a hand and reached for the doll. As soon as her fingers brushed the doll’s cheek, she snapped her hand back as though she had been burned before spinning around to stare at me with fear in her eyes.
“We need to get the hell out of here,” she murmured through clenched teeth.

K- I am completely enchanted.  You’re an incredible writer and I am honored that you have taken the time for this interview.

C- Kat, this whole interview was a blast!  Thanks once again for asking me to do this.

K- It was my pleasure!  I will be reading more of your books.  I hope you’ll come back and chat again.  Thank you so much.

Thanks again for a wonderful review and interview, Kat! :)

If you like my writing, check out my books!